Rapidly rising caseloads alarm researchers, who fear the virus may make its way across the globe. But scientists cannot yet predict how many deaths may result.

The Wuhan coronavirus spreading from China is now likely to become a pandemic that circles the globe, according to many of the world’s leading infectious disease experts.

The prospect is daunting. A pandemic — an ongoing epidemic on two or more continents — may well have global consequences, despite the extraordinary travel restrictions and quarantines now imposed by China and other countries, including the United States.

Scientists do not yet know how lethal the new coronavirus is, however, so there is uncertainty about how much damage a pandemic might cause. But there is growing consensus that the pathogen is readily transmitted between humans.

The Wuhan coronavirus is spreading more like influenza, which is highly transmissible, than like its slow-moving viral cousins, SARS and MERS, scientists have found.

In the last three weeks, the number of lab-confirmed cases has soared from about 50 in China to more than 17,000 in at least 23 countries; there have been more than 360 deaths.

But various epidemiological models estimate that the real number of cases is 100,000 or even more. While that expansion is not as rapid as that of flu or measles, it is an enormous leap beyond what virologists saw when SARS and MERS emerged.

When SARS was vanquished in July 2003 after spreading for nine months, only 8,098 cases had been confirmed. MERS has been circulating since 2012, but there have been only about 2,500 known cases.

The biggest uncertainty now, experts said, is how many people around the world will die. SARS killed about 10 percent of those who got it, and MERS now kills about one of three.

The 1918 “Spanish flu” killed only about 2.5 percent of its victims — but because it infected so many people and medical care was much cruder then, 20 to 50 million died.

By contrast, the highly transmissible H1N1 “swine flu” pandemic of 2009 killed about 285,000, fewer than seasonal flu normally does, and had a relatively low fatality rate, estimated at .02 percent.

The mortality rate for known cases of the Wuhan coronavirus has been running about 2 percent, although that is likely to drop as more tests are done and more mild cases are found.

It is “increasingly unlikely that the virus can be contained,” said Dr. Thomas R. Frieden, a former director of the Centers for Disease Control and Prevention who now runs Resolve to Save Lives, a nonprofit devoted to fighting epidemics.

“It is therefore likely that it will spread, as flu and other organisms do, but we still don’t know how far, wide or deadly it will be.”

In the early days of the 2009 flu pandemic, “they were talking about Armageddon in Mexico,” Dr. Fauci said. (That virus first emerged in pig-farming areas in Mexico’s Veracruz State.) “But it turned out to not be that severe.”

An accurate estimate of the virus’s lethality will not be possible until certain kinds of studies can be done: blood tests to see how many people have antibodies, household studies to learn how often it infects family members, and genetic sequencing to determine whether some strains are more dangerous than others.

Closing borders to highly infectious pathogens never succeeds completely, experts said, because all frontiers are somewhat porous. Nonetheless, closings and rigorous screening may slow the spread, which will buy time for the development of drug treatments and vaccines.

Other important unknowns include who is most at risk, whether coughing or contaminated surfaces are more likely to transmit the virus, how fast the virus can mutate and whether it will fade out when the weather warms.

The effects of a pandemic would probably be harsher in some countries than in others. While the United States and other wealthy countries may be able to detect and quarantine the first carriers, countries with fragile health care systems will not. The virus has already reached Cambodia, India, Malaysia, Nepal, the Philippines and rural Russia.

“This looks far more like H1N1’s spread than SARS, and I am increasingly alarmed,” said Dr. Peter Piot, director of the London School of Hygiene and Tropical Medicine. “Even 1 percent mortality would mean 10,000 deaths in each million people.”

Other experts were more cautious.

Dr. Michael Ryan, head of emergency responses for the World Health Organization, said in an interview with STAT News on Saturday that there was “evidence to suggest this virus can still be contained” and that the world needed to “keep trying.”

Dr. W. Ian Lipkin, a virus-hunter at the Columbia University Mailman School of Public Health who is in China advising its Center for Disease Control and Prevention, said that although the virus is clearly being transmitted through casual contact, labs are still behind in processing samples. 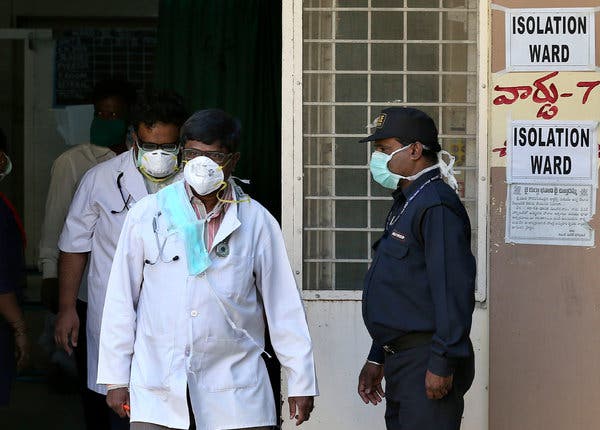 Be Ready for coronavirus

How to cope with stress during 2019-nCoV outbreak

New measures and restrictions will go into effect today in France, limiting people's movements and activities as the country's coronavirus cases continue to spike. All vehicle and pedestrian movements